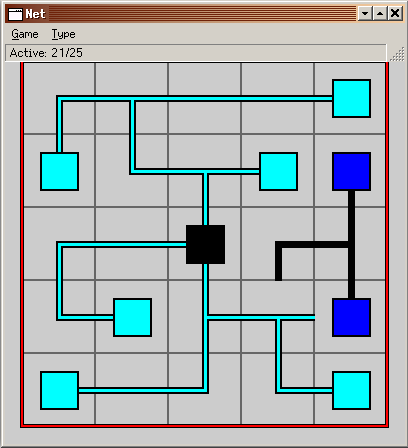 Black Box - Find the hidden balls in the box by bouncing laser beams off them.
Bridges - Connect all the islands with a network of bridges.
Cube - Pick up all the blue squares by rolling the cube over them.
Dominosa - Tile the rectangle with a full set of dominoes.
Fifteen - Slide the tiles around to arrange them into order.
Filling - Mark every square with the area of its containing region.
Flip - Flip groups of squares to light them all up at once.
Flood - Turn the grid the same colour in as few flood fills as possible.
Galaxies - Divide the grid into rotationally symmetric regions each centred on a dot.
Guess - Guess the hidden combination of colours.
Inertia - Collect all the gems without running into any of the mines.
Keen - Complete the latin square in accordance with the arithmetic clues.
Light Up - Place bulbs to light up all the squares.
Loopy - Draw a single closed loop, given clues about number of adjacent edges.
Magnets - Place magnets to satisfy the clues and avoid like poles touching.
Map - Colour the map so that adjacent regions are never the same colour.
Mines - Find all the mines without treading on any of them.
Mosaic - Fill in the grid given clues about number of nearby black squares.
Net - Rotate each tile to reassemble the network.
Netslide - Slide a row at a time to reassemble the network.
Palisade - Divide the grid into equal-sized areas in accordance with the clues.
Pattern - Fill in the pattern in the grid, given only the lengths of runs of black squares.
Pearl - Draw a single closed loop, given clues about corner and straight squares.
Pegs - Jump pegs over each other to remove all but one.
Range - Place black squares to limit the visible distance from each numbered cell.
Rectangles - Divide the grid into rectangles with areas equal to the numbers.
Same Game - Clear the grid by removing touching groups of the same colour squares.
Signpost - Connect the squares into a path following the arrows.
Singles - Black out the right set of duplicate numbers.
Sixteen - Slide a row at a time to arrange the tiles into order.
Slant - Draw a maze of slanting lines that matches the clues.
Solo - Fill in the grid so that each row, column and square block contains one of every digit.
Tents - Place a tent next to each tree.
Towers - Complete the latin square of towers in accordance with the clues.
Tracks - Fill in the railway track according to the clues.
Twiddle - Rotate the tiles around themselves to arrange them into order.
Undead - Place ghosts, vampires and zombies so that the right numbers of them can be seen in mirrors.
Unequal - Complete the latin square in accordance with the > signs.
Unruly - Fill in the black and white grid to avoid runs of three.
Untangle - Reposition the points so that the lines do not cross.